Nationally, the number of listed properties climbed to 339,026 in September 2015, increasing 1.4% from August 2015, with the number of sale listings remaining largely unchanged to this time last year. A monthly rise in sale listings for September was expected due to the normal spring seasonality historically recorded at this time of year.

In contrast, year-on-year results indicate that Melbourne and to a lesser extent Hobart experienced excessive yearly falls. Melbourne recorded the biggest yearly change, with listings falling by 16.9%, reducing the number of properties for sale to 35,760. Hobart also recorded yearly falls with records indicating a yearly change of 9.9%.

The Sydney surge in listings is another indicator now suggesting that the Sydney housing market is now slowing. Buyers should now find there is a little more choice out there compared to earlier this year. Yet, I note that asking prices are still higher. I suspect vendors are not quite registering that conditions have changed somewhat since the white hot market of autumn.

The Melbourne result is also interesting in that there was barely any movement at all in listings in September and that stock for sale is well down on this time last year. This is suggestive of a strong housing market that is not slowing down at all. 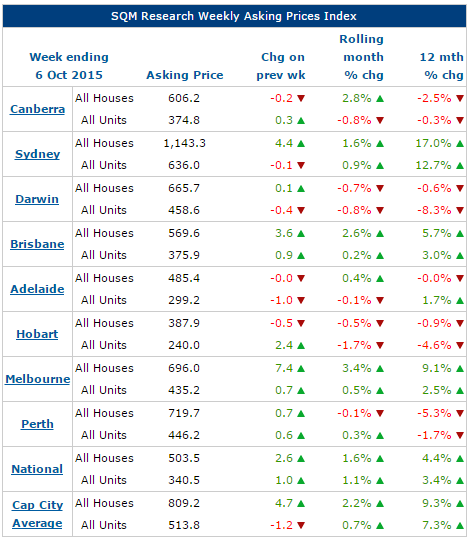 While listings in Sydney surged, asking prices for Sydney dwellings continued to climb over September, with a total monthly rise of 1.6% for houses and 0.9% for units. The median asking price for a unit has now reached $636,100, while the median house asking price in Sydney is $1,143,300, according to SQM Research.